Just let the puppies go – "they'll figure it out" ?

Some time ago I had a private one-on-one session with Meghan (not her real name) and her young adolescent dog, Sam (not his real name either). The main reason she had booked the appointment was because she needed some help with learning how to address Sam’s fearfulness toward many things (including unfamiliar people) and reactivity toward other dogs.

As we sat on the floor talking, Meghan started by describing some events from the first couple of months after getting Sam. She had been told how important puppy class is, and heeding the advice, she took him to a puppy play group.

The play group was made up of a fairly large number of puppies, many of them considerably larger and older than 8-9-week old baby Sam. As people and puppies entered for class: they were encouraged to put the puppies down on the floor and let them go. Sam was completely overwhelmed by the commotion and all the rowdy puppies running up to him and often right into him, but the instructor tried to comfort Meghan and tell her it was all fine and that Sam would soon “figure it out.”

The older, bolder puppies who had come to the playgroup a few weeks already were all wild and happy and excited, running around like kids too high on sugar – often bowling little Sam over as they swept around the room. Sam kept looking for an escape – his tail tucked,  his ears flattened against his head. He kept looking for a place to hide. When Meghan’s instinct kicked in to protect him from some of the older puppies who kept coming over to him, running him over and pinning him to the floor – and she wanted to pick him up – the instructor told her not to do so: that this was important learning and again reiterated that “Sam would soon figure it out” and that this was all part of the very important socialization process.

Meghan’s gut instinct was that Sam did not enjoy the play group. But she was conflicted because she had heard over and over again about how important it was to “socialize your puppy”. She was told if she just keeps it up and introduces him to more and more dogs and puppies – “Sam would soon figure it out”. She went back to that same puppy play group two more times. Each time with the same result. Sam would look for a place to hide: but Meghan was encouraged not to let him hide but bring him out to the face his foes. The encouragement being “Sam needs to figure this out.”

After three visits to the play group, Meghan stopped going – deflated, unhappy but unsure what to do. The only thing she was somewhat certain of, was that this play group was not a place Sam enjoyed to be.

Months then rolled by. Sam’s fear issues now escalating and concern with other dogs getting bigger and bigger. And that’s how I first met Sam and started to address these issues.

Very unfortunately for a puppy like Sam: that puppy play group was really not a good confidence boost at all. On the contrary – within minutes of arriving the first time, Sam had already been convinced that perhaps this was not a safe place at all, nor were the other puppies safe. Add to that repeated exposure of the same…it would be like taking a young child to a playground full off bullies and saying “just go in there and join the fun – you’ll soon learn to enjoy it”.

When we put it into human language, we can see just how absurd that is – yet there is this very prevalent belief that somehow puppy “socialization” is just that: letting them loose together and they will all come out fine.

Sometimes we get it so wrong.

“Socialization” is not a word I like at all. I think it encourages JUST that kind of thinking: just throw puppies into any group of puppies and “they’ll figure it out – and better yet: they will learn to love it”.

Maybe sometimes. But definitely Not always. What about all the many puppies out there – who are exactly like Sam and don’t come out of it thinking it was any fun at all.

There are many things and situations we put our puppies and dogs in – the question we need to remember to ask is:
“At what cost?” (to them).
And the beautiful, yet simple question Suzanne Clothier reminds us to repeatedly ask: “How is this for you?”

We need to learn to see what the puppies are saying in the moment? Their body language is extremely truthful: a direct mirror of how they are feeling – if they are not having fun: it really is our responsibility as their guardians and Best Friends to help them out.

It’s impossible to build confidence in a puppy who is pushed to feel overwhelmed, is scared and worried about his safety.
They need, first and foremost to feel safe!

The iPhone photos here are from last nights’ Puppy Foundation Skills class: where we could have had a “Sam situation”. A tiny, wee baby puppy; Tommy – with three much older, bolder, way more rambunctious – and confident pups. Had we
just thrown them together – I am not sure the little baby Tommy would have had much fun at all.

But instead we went very slow – to hopefully be able to go fast – later.

I like to start puppy class with the puppies on leash and by doing some training before we ever let them have an opportunity to play and go free. These 15-20 minutes are golden: for one, it allows an opportunity to work owner+puppy and practice some simple skills, but it also takes the focus and wild emphasis away from the other puppies and puts it where it belongs: on the dog-human bond. And lastly – it also allows plenty of time and opportunity to identify if there is a puppy in the group that needs to be given special consideration before the group is let go off leash.

Before we eventually did let them go off leash to have playtime, we had first talked about the big size and confidence difference in these puppies and how it was important to make certain that the older puppies would not be free to bowl over little baby Tommy.
To gradually build him up: we encouraged him to stay in safe spots where the other puppies could not run into him! Having a tiny puppy sit protected by a person’s legs on the floor is a great, safe spot for them to be able to see what’s going on without being right in the middle of it.

The first several minutes Tommy spent sitting safely between his owner’s legs.
He wasn’t quite sure what to think about the older puppies. And that’s fine! He’s just a little, tiny baby. He needs to be able to develop at the pace he is comfortable and safe.

All the people in the class were most fantastic, and all helped and “got it” about giving Tommy a safe “protector shield” so that the older puppies never once had a chance to take him out, roll him or bowl him over. Toward the end of the class – now with a good and safe experience under his belt  – he actually started to venture off and go explore a few feet away from the safety net of his person. And here’s the gem photo to finish off with. Tommy, now braving it over to a much much bigger puppy: actually offering a baby bark, play-bow and inviting Betty to play! 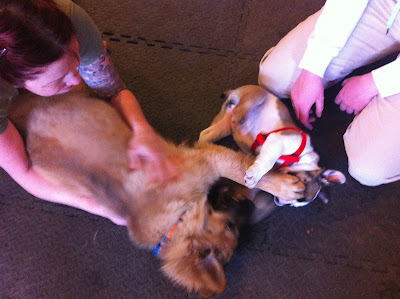 What was the “cost” of going very slowly and carefully?