Play hard and then crash 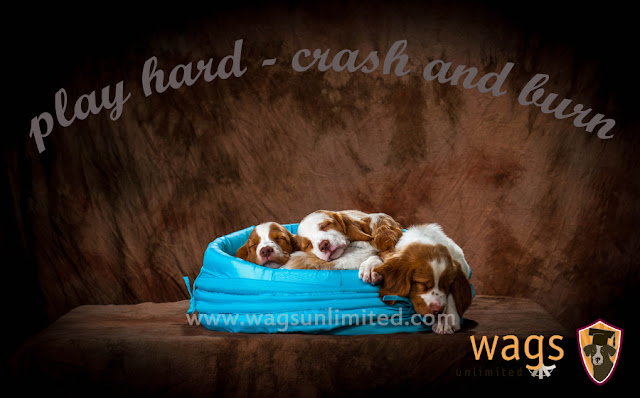 They are either On, or OFF, aren’t they?! This was the scene on Monday after working on the photo shoot with the Brittanys for a while. The Puppies had had a BLAST zooming about in an ex-pen, in the studio, doing all things they were’t “supposed” to (having a Great Time!). Carla of Hunter’s Heart commented and said it was probably the most fun these puppies had had in all their 8-week lives. What an awesome time!

Posing for photos.
Not posing for photos: but going over and kissing the photographer instead.
Licking and then perhaps also just a tiny bit…biting her ear.
Getting tangled in her lovely long hair.
Smelling her clothes: does she have cookies?
Tasting the camera strap.
Licking the lens.
NOW: Getting a toy, playing tug with the photographer.
Tasting a treat. Yummy!
Going back to business.
Posing some more. Or not.
Running away again. Having a GREAT time.
Running and playing until…

Well, it takes its toll. All that exploration, all that newness of a new place. New smells. New experiences. Being a Super Model.

Crash and Burn. Just like that. On the spot.
It’s hard work, man.