"This puppy can't do it!" or do we need to find better motivation? 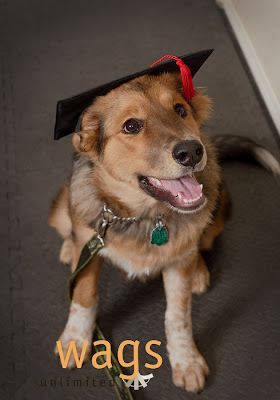 Last night in Puppy Foundation Skills class we worked on a variety of Attention games and Focus. There were five pups in the group and for most of them it was week two or three in a very distracting environment! Quite often we’ll have this conversation about the need to find something (usually food or toy) that Puppy really likes that we can use to reinforce (reward) the behaviors we like and are working on. Without something that the puppy truly cares about, the “training” can easily become an exercise in frustration and can understandably seem like a battle that can’t be won. It can totally seem like “This puppy can’t or won’t do it!” I’ve often heard people sigh in frustration and say “My puppy is just too distracted!”
If that seems to be the case – (usually) there is nothing wrong with the puppy. There is just an imbalance between what the owner is using as a “reward” and a very stimulating environment that seems very enticing and inviting (puppy mates to potentially get to play with?!!!) Unless we really take care too look for something that the puppy TRULY values – why would a baby animal automatically “know” what is wanted or asked of him and choose to turn to a person with “mediocre” rewards?
Quite often we have this idea that any food should do – any puppy should work for any kind of cookie or any kind of toy in any kind of environment. After all – we gave the puppy SOMETHING, right? Shouldn’t that be enough?
Something pretty cool happened last night that illustrates just how big a difference the choice of reinforcement (reward) can make.
I had been keeping an eye on one of our newest members of the class, observing and hearing from the handler how distracted her puppy was; unable to focus. I was sensing some frustration growing. I asked if I could borrow the puppy for a moment to demonstrate the next exercise (a baby heeling/ attentive leash walking exercise).
After quickly establishing that the puppy was comfortable being with me, I held the leash handle in my hand and simply waited for the puppy to acknowledge me. After a short moment, the puppy offered a quick head turn in my direction…I praised her up and said “YES!” and smiling warmly at the puppy I pulled out some string cheese to reward this voluntary check-in. She ate her cheese slowly as if wondering about it – and went out to the end of the leash to strain toward another puppy and see if she would get to go play. I didn’t let her get to the puppy but stood still again waiting for her to check back with me…waited a little longer this time…and eventually she looked back in my direction. I again told her “YES!” and offered another piece of string cheese. Same lukewarm reaction from her. She ate the cheese but not with the kind of gusto that comes from true enjoyment. A few more repetitions of the same….each time it seemed to take a little longer before she checked back with me and between each repeptition there seemed to be more straining away and more sniffing of the floor. I was now looking for plan B as I was running out of cheese and thinking “This is not really working”.

So I re-loaded my pocket with some freeze dried liver instead. My demo-Puppy could immediately smell the difference and what a shift in attitude we got to witness! All of a sudden I had a puppy looking up to me, offering gorgeous attention, and when praised and told “YES!” she was snarfing up her liver with GUSTO!  and very quickly re-orienting to me yet again and again… as if continually asking “Is this what you want? This? What about this? And this too?”
We started exactly the same as before. I stood still, just waiting for her to look in my direction. When she did, I told her “YES!” smiling and offering her a piece of liver or two. It only took seconds before she simply would not look away, she would not leave my side! She just stood there beside me looking into my face and eyes. That is the first step. When that was established, I would start to move. One or two steps. Was puppy following? YES! she was! So again I would verbally praise her up, tell her YES! and pull out a piece of liver and reward right next to my pant leg (in the location I want the dog to walk for nice polite walking-beside). It was a beautiful sight and this puppy had in a matter of minutes transformed from “too distracted to focus” to a focus-machine…looking for ways to earn more reinforcement!

There was no magic to this – the importance lies in Understanding what happened and how it impacts your dog’s ability to learn and focus and be motivated to work. What we use as “rewards” are only reinforcing to the dog if the DOG sees them as true rewards and WANTS them! Sometimes we simply have to experiment and try different things! Like with my demo puppy. We learned something about what she truly finds valuable yesterday.

In this puppy’s case the difference between “too distracted and not interested in training” and a “learning machine” involved a switch from something we “think” should be a reward: cheese (which is something many dogs looove – but this puppy felt lukewarm about) or the dry dog bisquits the owner had been trying to use (which clearly were not of high enough value) to something we let her tell us she WANTS: dried liver.

It’s really no different than motivating people when you think about it. One of my mentors and teachers, Chris Bach (The Third Way) illustrated this to me with a very memorable example. Let’s say you have a job where there are big performance bonuses paid out in event tickets. You are a hockey fan and really don;t care for the Opera at all, but your boss at work insisted on paying your performance bonus in tickets to go see the Opera. How “rewarding” would you find that? How long would you continue to work in that kind of situation? Would it seem like it’s worth your while?

But if your boss now had a conversation with you about your wants and desires and you could tell him you’d really prefer tickets to hockey games instead – and he started to give you wonderful tickets to your favorite hockey teams’ games…now, wouldn’t that change things? All of a sudden you would feel like you were heard and had great motivation to work!

So, for our dogs – whom we do not have the ability to converse with like that…we need to find out in different ways. It’s worth doing some experimentation with and can be a discovery as simple as what we had in class. Or it might take some time and effort to really find out.
Sometimes the top reinforcers will change, too. So keep experimenting and try different things! Also switch things up. The more highly-sought-after rewards you know you have in the repertoire to use, the easier the journey will be! What are your dog’s favorite “tickets”? What is going to help motivate him so that he goes from “Too distracted to work” or “mediocre response” to that “WITH GUSTO and brilliance!” response?!